While discussing our favorite scriptwriting literature on Facebook with some friends, I remembered that I wrote a long review about David Mamet’s book “On Directing Film” back in February 2013 for the newsletter of the Association Of Film- And TV Script Consultants (VeDra). This is the article:

The moments that shifted my perspectives on screenplays as a script consultant often happened when I was looking beyond my own nose – in the editing room, while repeating lines with an actor or while sitting next to the director on set.

Thus it is a book that has the word “Directing” as part of its title, that is one of my favorite books on scriptwriting since years: ON DIRECTING FILM is based on a series of lectures given by writer and director David Mamet in 1987 at Columbia University’s film school. The book is only 128 pages long, and it is polemic, radical and unorthodox, which makes reading it a very un-analytical pleasure. 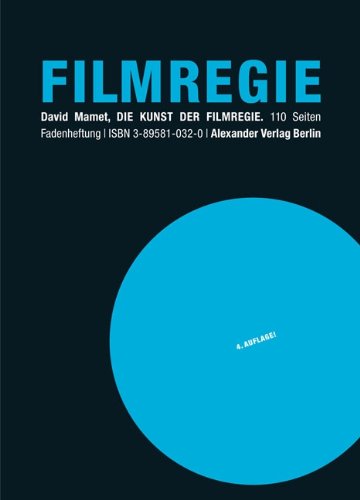 In his short introduction David Mamet explains his principles of visual narration. He compares good movies to dreams, collecting “neutral” images, which trigger the story inside the head of the audience by the way how they are contrasting each other. The editing tells the story.

The main chapter is basically a game of questions and answers Mamet plays with his students. Starting with a simple situation – a couple of students gathering for a class – he starts developing a film narration. Which perspective would you chose for the first shot? “It depends about the meaning of the scene” answers a student. And to find out what the meaning of the scene could be, Mamet keeps asking questions about the protagonist, the emotional theme of the scene and so on.

And here it is all about screenwriting, because these questions Mamet asks his students are exactly the ones that you would ideally ask yourself while writing the screenplay. Radically questioning, if an image/a scene/a shot is there because it is interesting per se (meaning it stays in the script or the film because of the ego of the writer/director to a certain degree), or if it really serves the story, Mamet comes to a conclusion: Keep it simple, stupid. Often the most simple way to tell a story is the best solution. But it can be really hard to find it, as we learn from Mamets discussions with his students.

David Mament also talks about pre-production and working with actors. But the heart of his lectures always stays the same: What is left, if you omit everything ornamental, all explainations, everything that is heavy with meaning? It is the pure story.

How to find this essence of the narrative (no matter if while writing or directing) is the content of this book. And in the end it is a reflection on the meaning of visual narration. The way this book is written – in dialogs – makes it easy to get into the minds of the students, so you start answering his questions after some time. And the learning curve comes into effect without “worksheets” or assignments. It happens simply by sitting in the class and listening to David Mamet.